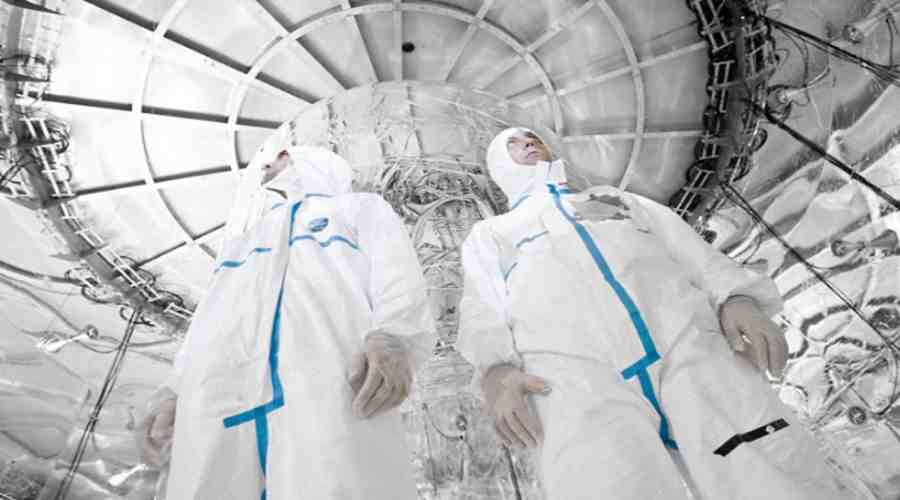 In anticipation of a new particle: the Majorana neutrino

An international team of scientists in the GERDA experiment is still looking for evidence of whether a neutrino can be its own antiparticle. And it breaks new records in measurement accuracy. About this search, which is dedicated to the publication in the "Nature", says a participant in the study, a physicist from the Jagiellonian University.

In Italy, the road from Rome to the Adriatic Sea would probably be much steeper and winding if not for the A24 highway. And this partially runs through a tunnel hollowed out in the interior of the gór – Apennineów. This piece of engineering not only makes life easier for drivers, but also for scientists. Indeed, particle physicists in the tunnel branch have built the Gran Sasso laboratory. This is where they study neutrinos.

Although neutrinos (in addition to photonów) are the most widespread particles in the Universe, there is still not much known about them. This is because neutrinos interact very weakly with matter. So weak that it is often referred to as a "particles-spiritów". That the móc observe neutrinos, scientists need a really quiet place.

– On the surface of the earth there are mnótion of noise, który would interfere with our measurements. Particles arrive from all directions, róalso from outer space. For example, in one hour in 1 square meter of area, muon aloneów hits ok. million,” says in an interview with PAP a participant in the study in Gran Sasso, prof. Marcin Wójcik from the Jagiellonian University. On the other hand, he says, in the lab inside the góry, protected by a 1,300-meter-thick layer of rock, happens much less: only 1 muon per hour passes through 1 square meter there. This makes it much easier to uncoverómending what is happening in the detector from the signalów coming from outside the experiment.

In the GERDA (GERmanium Detector Array) experiment – although an article in the prestigious "Nature" – is actually happening. few. For scientists are waiting for a signal, whichóry happens very, very rarely.

It is about the decay occurring in a germanium crystal, whichóry consists mainly ofównie with Ge-76. The theory predicts that the two protons in this isotope periodically change into a specific set of other particles: two neutrons, two electrons and two neutrinos. This phenomenon, whichóre can occur for a single Ge-76 once every trillion years (a singularity with 21 zeros) – and it’s time a dozen billionóin times longer than the age of the Universe. Chatting for such a unique event against all odds makes sense. AtomóThere is, after all, quite a lot of germanium in the detector – more than 35 kg for the time being, and the detector is capable of capturing any such decay. Although the total operating time of the device is only two years, GERDA has already detected thousands of such events.

It’s still nothing. Scientists hope to find traces of an even more unique process. They dream of observing how two protons in such a Ge-76 nucleus will decay into two neutrons and two electrons. And after dwóch neutrinos, whichóre then should arise, there will be no trace of. In simplified terms, we can imagine that one of the resulting neutrinos turned into an antineutrino and annihilated with the other.

This would mean that one neutrino was a matter particle and the other was an antimatter particle. That is, that they belong to dwóch worldów: matter and antimatter. In other words, neutrinos would be their own antiparticles.

Italian physicist Ettore Majorana proposed such a theory already at the beginning of the last century, and the neutrino, whichóre would be its own antiparticle, named in its honor the Majorana neutrino.

– The discovery would be as momentous as the discovery of the Higgs particle or the discovery of neutrino oscillations. And after all, that’s what Nobels were awarded for,” smiles Prof. Wójcik. And he adds that such an observation would shed some light on why there is more matter in the Universe than antimatter. Besides, the discovery would allow to better estimate the mass of the neutrino. And this has for physicistóin a not inconsiderable importance.

For now, it is known that this holy grail of physicistóin particles – the so-called. subóIneutrino-free beta decay of germanium 76 – a very rare phenomenon. – If for a single Ge-76 it would occur once in 50 quadrillionóin years (a quadrillion is one with 24 zeros – note. red.), we would have already noticed them,” says the scientist. He adds that so far this is a record accuracy. – And, after all, we would like to observe such events at least a dozen or so. Then we could probably consider it a discovery,” sighs the scientist.

Physicist tells how GERDA experiment looks like in Gran Sasso lab. The germanium crystals are placed there in a large, copper-lined steel barrel with a capacity of 65 cubic meters. During the experiment, this tank is filled with a very cold liquid – argon, który additionally mutes interactions of particles from outside. Inside the enriched germanium crystals suspended under these conditions, or in their vicinity, from time to time some isotopes decay into other elements. During these decaysóin emit characteristic electrical signals. By analyzing these signals, scientists are able to deduce what happened in the tank.

For now, the detector contains more than 35 kg of Ge-76. The latest results indicate that there is still not enough of it, however, because the sought-after decay may occur less frequently than we thought. However, since observations go too slowly with so much material, physicists want to expand their experiment. The next step could be to join forces with a team from the US and develop a detector that wouldórym under close observation would be first 200 kg, and eventually a whole ton of germanium 76. The team set up for this purposeóLEGEND, which includesórego includes scientists from the Jagiellonian University, has already begun work. If in this isotope actually occurs sometimes „Annihilation” dwóch neutrinos, with a thousand kg of germanium, surely this rare phenomenon would have been observed much more quickly.

Such experiments, however, pose quite a challenge, róalso financially, germanium 76 is because it is a very expensive isotope of. However, if the research helps determine why there is more matter than antimatter – no one will regret the money spent on the research.